The various schemes of transformer connection are identified systematically with an alpha-numeric string. Two letters represent the method of connection followed by a number which represents the phase shift of the secondary voltage relative to the primary voltage, expressed in hours, where one hour is equal to an angle of 30 degrees. The first letter is a capital letter, which relates to the higher winding, where Y=star, D=delta and N=neutral lead. The second letter is a small letter, which relates to the lower winding, where y=star, d=delta, z=zigzag and n=neutral lead. So Dy5 specifies a transformer with a delta higher and a star lower, where the lower voltage lags the higher voltage by 150 degrees.

1) Yy system is applied mainly for low power applications for symmetrical 3-phase loads, however its is sometimes used in high power applications where the neutral point must be earthed. This system has the disadvantage that the third (and other zero-sequence) harmonics are not isolated and can cause problems of overvoltage and imbalance especially at low loads. These problems can be reduced by the addition of a compensation winding connected in delta.

2) Dy system is usually applied to step-down transformers with high rated power, connected to a low voltage 3-phase distribution network. If the neutral wire is provided the user has the benefit of both line to line and phase voltages. It has the advantage of reduction of zero-sequence fluxes and associated currents.

3) Yd system is used mainly for step-up applications where the primary side needs to be earthed either directly or via an inductor. This system has the advantage of eliminating zero-sequence currents.

4) Yz and Dz systems are used for step-down applications of low rated power. Phase voltages can be used where the neutral lead is available. This solution is rarely used due to economic reasons. Comparing zigzag to star windings the number of turns required is 2/v3 higher, thus costing about 15% more. So this is limited to supplying asymmetric single phase loads whilst maintaining symmetry on the supply side.

Only the basic properties of the various connection systems have been presented above. For proper operation of the transformer it is important to select correctly. Sometimes it is necessary to make a detailed analysis of the entire system, considering converter type, load asymmetry and supply type, before correct selection can be made.

The most commonly applied connection systems of 3-phase, 2-winding transformers 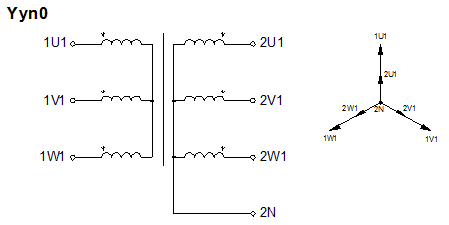 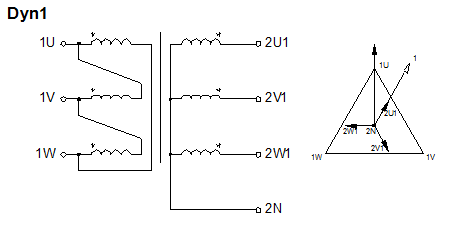 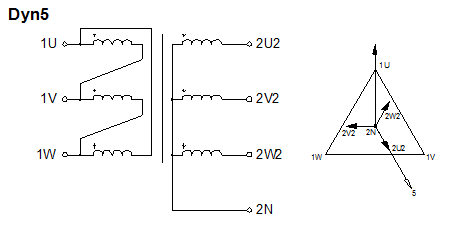 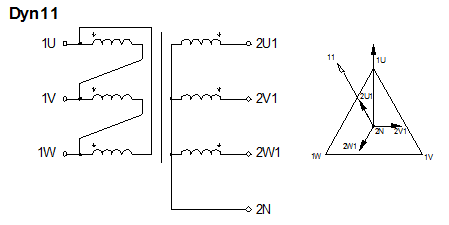 In order to provide power from a 3 phase supply to a multi-phase load (e.g. 12 pulse rectifiers where 6 phases are used), it is necessary make a power conversion. This can be achieved by employing a transformer with a multi-phase secondary circuit.

A range of transformers that convert from three phase to multi-phase systems are shown below:

Transformer with non-typical construction and special properties can be created to meet specific technical requirements. 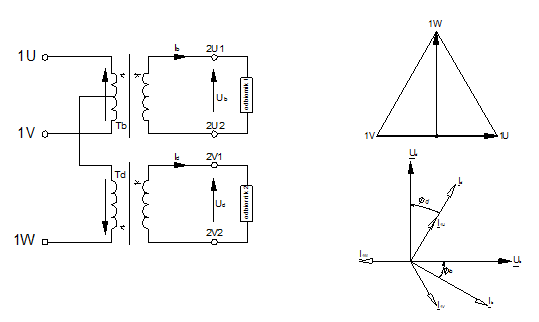 The Vv system is the next most widely used method for conversion from a 3-phase supply to a single phase load. Here the transformer iron construction is the same, but with primary and secondary windings only on the two outer legs. Connection is as shown below. This system has the advantage of providing high single phase power to the load, but with the disadvantage of asymmetric loading of the 3-phase source. The centre phase has twice the current of the outer two phases. 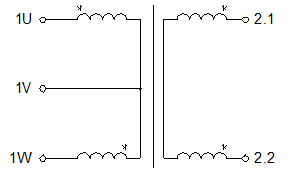 Insulation class Identifies the temperature rating of an insulating material used, where a letter code indicates the maximal working temperature of the transformer. Exceeding this temperature during continuous operation would shorten the service life of transformer and the period of its failure-free operation.

Where the level of protection against electric shock is better than that indicated by the first digit of the IP code, an additional letter may be included. The letter code indicates protection against contact with dangerous voltage as follows:

The method of cooling is marked with a letter code which indicates the cooling medium and the way it is circulated.

Examples of cooling method designations applied at Elhand are as follows: 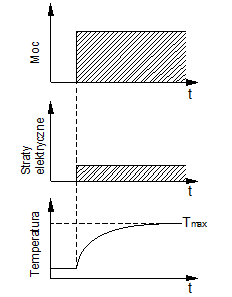 2. Short-time operation - (S2) Operation for a determined period of time, starting from cold state, with breaks in operation long enough to cool the transformer down to a temperature close to ambient. Operating time (tp ) is given in minutes (e.g. S2-15 min.). Figure 2 below shows operating duty cycle and temperature rise for short-time operation. 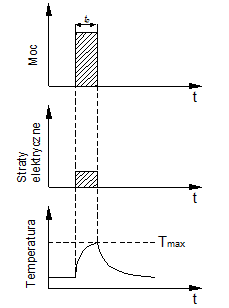 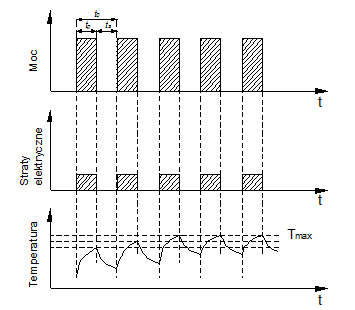 Two or more transformers are said to be connected parallel when both primary and secondary sides of each transformer are connected to common buses on the supply and load sides respectively as shown in the figures below.

Parallel operation of transformers is correct when:

In order to fulfill the above conditions transformers which are to operate in parallel must meet the following requirements:

If any of the above conditions are not fulfilled, equalizing currents will flow in the secondary windings of the transformers, resulting in additional losses. This has an adverse influence on the load distribution which prevents the transformers from operating at their full rated power.

Transformers are manufactured in appropriate materials to suit the operational climatic conditions. This information is usually included on the rating plate, in the form of an alpha-numeric symbol, in accordance with EN 60076-11, which describes the climatic class relating to humidity, condensation, contamination and ambient temperature. The classification is as follows:

Storage, transportation and usage environments are covered by EN 60721-3:

In accordance with EN 60076-11 standard the conditions in which the transformer is located are divided into two categories:

In case of dry-type transformers the environmental conditions are important not only during their operation but also when they are stored prior to installation.

Example of full designation as per EN 60721 and including the occurrence of all environmental conditions in places protected against the influence of atmospheric conditions may have a very developed form, such as: 3K2/3Z1/3Z4/3B1/3C2/3S1/3M4.

The most commonly used designations of environmental conditions as per EN 60721 are as follows:

In accordance with EN 60721 standard:

2. Operation altitude above 1,000 m above sea level.
If a transformer, choke or power supply is installed at the altitude H >1000 above sea level, then the load power should be reduced according to the table below:

4. Power frequency.
A transformer designed for a rated frequency of 50Hz may work at higher frequencies (up to 150-200 Hz). This is because the total core losses are inversely proportional to the power frequency at a constant voltage. However, when the frequency is lowered than rated, the supply voltage should be lowered in order to avoid an increase in core losses and no-load current. This relationship is given in the formula below. Overheating and damage to the transformer may result if this voltage reduction is not observed.

5. Enclosure.
The transformers produced by Eland Transformatory with IP00 protection are designed to operate without restriction in ventilated IP23 enclosures having dimensions detailed in the ELHAND catalogue or provided the ambient temperature of the transformer is in accordance with that given on the rating plate. Where transformers are installed in non-ventilated IP44 or IP54 enclosures, transformer selection should be made after discussion with the the manufacturer to ascertain power loss and power dissipation requirements.

The most common reason of transformer failure is damage to winding insulation. This can be caused by over-current or over-voltage. Over-current occurs when the transformer is overloaded, such as from a short circuit. This results in overheating of the winding which leads to the total destruction of the insulation in a short time.

Overheating of windings can be caused by electrical phenomena as discussed above or non-electrical phenomena, for example by insufficient air exchange, increase of ambient temperature, decrease of water flow (in case of water-cooled windings), fan failure or soiling of fan protective mesh in the case of air-cooled transformers.

Short-circuits cause, in addition to overheating, the occurrence of a very large electrodynamic force between the windings and their elements. 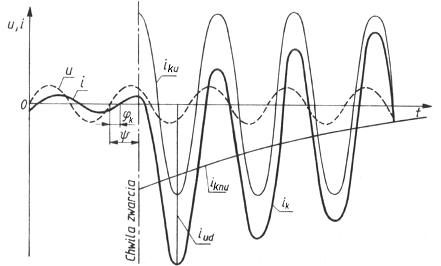 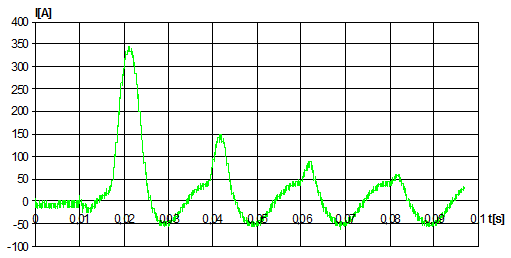 It is not recommended to protect the transformers with popular overcurrent switches of S type, although their version with D characteristics (band 10-20xIn) is available, because the transformer starting current may trigger an electromagnetic release when the transformer is switched on.
The best solution for transformer protection is the application of switch with adjustable parameters of time-current characteristics separately for short-circuit and overload modules. In addition to that such switches allow to set the delay, so we can ”put to sleep” its reaction, e.g. during the start-up which lasts usually for first 5-7 half-periods. The disadvantage of such switches is their high price.
Also the protections on secondary side can be applied but they protect more the receiver. In this case the value of fuse-elements rated current cannot exceed the value of rated current on transformer secondary side and the fuse-element time-current characteristics depends on receiver character.

Temperature sensors.
Fuses and switches will protect against overloading, but there are many other factors which may lead to overheating of the transformer. For this reason temperature sensors are installed in the windings, depending on the application and requiremnets of the user.

It is possible to apply the following sensors:

The sensors are placed inside the winding. In some applications, e.g. mining or medical, it is required to install two types of sensors on one winding.

Example: Pt100 type sensor to constantly monitor the winding temperature and additionally a NO or NC bi-metal switch which signals when a temperature limit is the exceeded.

Low-voltage power supply networks can be:

The types of low-voltage supply networks are marked with a string of letters.
First letter indicates the relation between network system and earth: 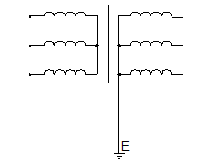 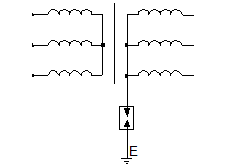 Second letter indicates the relation between the earth and the conductive parts which are not under voltage in normal operating conditions:
N - direct connection of accessible conductive parts with earthed neutral point of network system

T - direct connection of accessible conductive parts (which are subject to protection) with earth, irrespective of the earthing of network system neutral point with PE conductor

S - two separate conductors, connected to each other only in the neutral point of network system, fulfill the function of neutral (N) and protective (PE) conductors in the entire network system

Modern medicine is supported by sophisticate electronic appliances used to provided diagnosis, treat illness and save life. Such appliances need to be supplied by an extremely safe and reliable power source.

If traditional method of power supply is applied (earthed neutral system), then the electric energy can be dangerous. Especially sick people, children and neonates are exposed to electric shock. Natural human protective barrier, i.e. epidermis, is interrupted during treatments and operations. The patient can be connected to various instruments which are connected simultaneously, through signal lines, with recording devices. Damage to the insulation of any appliance supplied from traditional network causes the risk of electric shock to the patient and will immediately switch off the damaged appliance and sometimes other appliances which are connected to the patient. It is not allowed.

For this reason medical equipment is by an isolated earth supply IT which is manufactured in accordance with the requirements of IEC 60364-7-710 standard.

The application of IT supply system in medical facilities ensures the safety of patients and medical personnel because an insulation failure is detected but:

Medical appliances are fitted with a detection system which warns the operator of degrading insulation.

IT supply system is applied in medical rooms supplying appliances:

Rooms belonging to this type include:

Elhand Transformatory from z Lubliniec and Horus Energia from Warsaw offer complete equipment sets, manufactured in accordance with IEC 60364-7-710, for the safe and reliable supply of medical facilities.

State of nominal operation (no alarm state) of IT supply systems are presented schematically on the figures below:

We use information saved using cookies and similar technologies, including for advertising purposes and statistical and to adapt the website to the individual needs of users. the use of website without changing the cookie settings means that they will be stored on your device final. You can change your cookie settings at any time. More information can be found in our "Cookies Policy".