Electrical equipment is required to meet the relevant international and national standards.
A standard is a document which describes suitable electrical and mechanical design, construction and test requirements to provide for safe and reliable operation within a specific working environment.
Dry-type transformers: The following standards apply:

Depending on intended use, an equipment should also meet the requirements defined by certain classification societies and is required to be certified accordingly. Conformity and certification by such societies should be indicated on the equipment.

Shipyard industry: Supervision and certification is required by the following classification societies:

Armed forces: Equipment is required to meet National Military Institution for Quality Assurance Affairs and have:

Mining: Equipment should be certified to the relevant mining application and issued by the appropriate testing laboratory or certification body of a given country.

CE mark: The CE mark was introduced as a directive of the European parliament. The CE mark, placed on the product, guarantees that it was manufactured and tested in accordance with the relevant regulations. The CE mark is primarily concerned with the “safety and health of equipment users and the influence of the equipment on the environment”.

The CE mark indicates that the product is safe and can be sold within European Union markets. The responsibility for correct use of the CE mark rests with the manufacturers, distributors and agents of an equipment. The CE mark is not a proof of product quality. The following European directives apply:

Electromagnetic Compatibility Directive (EMC) no. 2004/108/WE - This directive is relevant to devices which produce, or are susceptible to, electromagnetic interference. It does not regard the equipment which may produce interference in the transient states.

Low Voltage Directive (LVD) no. 2006/95/WE - This Directive describes the requirements for electric equipment operating in the following voltage ranges:

COMMISSION REGULATION (EU) No. 548/2014 of 21 May 2014 on implementing
Directive 2009/125/EC of the European Parliament and of the Council with
regard to small, medium and large power transformers.

Product manufactured in accordance with the requirements of above-mentioned Directives should: 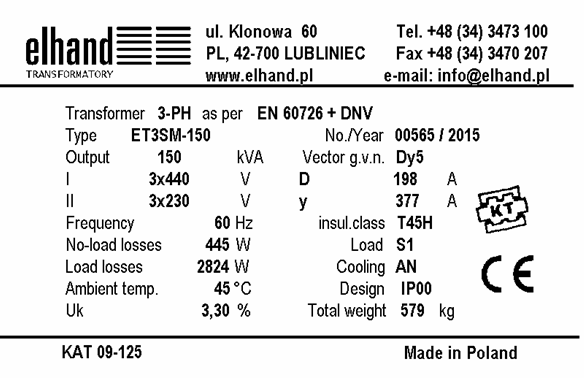 We use information saved using cookies and similar technologies, including for advertising purposes and statistical and to adapt the website to the individual needs of users. the use of website without changing the cookie settings means that they will be stored on your device final. You can change your cookie settings at any time. More information can be found in our "Cookies Policy".